The player fights alongside Rangers of the 1st Ranger Battalion in the first mission, but they are all killed later. We see a lot of them in the mission "Omaha Beach" as part of the 2nd Ranger Battalion (note that this mission much similar to the movie "Saving Private Ryan) but many are killed in the fighting. They would be seen later again in Sniper's Last Stand and the Attack on Fort Schmerzen. Some Rangers were seen in the Kasserine Pass, on the expansion pack Breakthrough. Due to a development mistake they portray members of the 34th Infantry Division in mainland Italy as well, like how the U.S. II Corps/Patton's 7th Army portrayed members of the 82nd Airborne Division.

The Rangers appear in two levels, 'Your Finest Hour' and 'Into the Breach', as members of the 2nd Ranger Battalion storming Omaha beach during Operation Overlord.

They generally do not effect whether or not the player lives or passes the level, but do count as an objective in 'Your Finest Hour', as the player must provide cover fire for four squadmates. In 'Into the Breach', the Rangers appear at the beginning of the level at the base of one of the bunkers, and one Ranger at the end congratulating Patterson.

The 5th Ranger Battalion accompanies the player on every level of the game. The player, Lt. John Berg, is working undercover with the 5th Rangers to find out what the Nazis are developing, which turns out to be a V2 Rocket.

The Rangers in-game use the Thompson most of the time but rarely they can be seen carrying M1 Garand rifles. They have AI basic enough to do most things, such as kicking grenades away and killing enemies.

The 5th Rangers wear the same outfit as each other and always the same camo in every level. As well, all 5th Rangers look exactly the same in hairstyle and face.

On certains parts of levels, the Rangers do not help the player at all until the end or if he reaches an objective like an anti-air gun. If all Rangers near the player die, then more "teleport" somewhere in the level and run to the palyer's position.

In the multiplayer there are three different Rangers available for choose. 2nd Rangers,4th Rangers and 5th Rangers.

In the Wii-exclusive level, Downed Pilot, Captain Lasry uses the 4th Rangers soldier's model even though he is an OSS Operative.

In Medal of Honor (2010), the United States Army Rangers are one of the major factions. One of the playable characters, Dante Adams, is a Ranger. They are airlifted into the Shahikot valley to destroy a large contingent of insurgent fighters. Most of the Rangers are scripted objects, existing with the sole intent of adding intensity to the campaign: immediately after the initial ambush, the Rangers are seen being shot at from numerous directions. Apart from Dante's squadmates, no Army Rangers are seen again until Rescue the Rescuers, where they defend their downed Chinook from the miltants encroaching on their position.

Non-player Army Rangers are depicted as using an M4, with a Trijicon ACOG. Dante, however, comes equipped with several additional weapons and equipment. He is armed first with an M249 SAW with a mounted M145, an M9, several grenades, and an M870. In Rescue the Rescuers, he is armed with an M4A1 with a mounted Trijicon sight and an underslung grenade launcher. Dante can also use the SOFLAM.

5th Rangers equipment in a briefing file in Heroes 2. 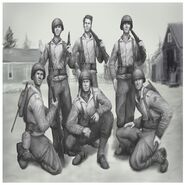 Rangers in the briefing

Rangers in the MOHAA Beta