The Aichi D3A Type 99 Carrier Bomber (Allied reporting name "Val")[2] is a World War II carrier-borne dive bomber. It was the primary dive bomber of the Imperial Japanese Navy (IJN) and was involved in almost all IJN actions, including the attack on Pearl Harbor.

"Val" first appears alongside other Japanese planes in "Day of imfamy " they have a different strategy of attacking, diving from above and strafing the deck, vals later appear in the mission "Pearl Harbor" were they bomb the Oklahoma causing it to roll over nearly killing the player, a huge squad of dive bombers appear in the final segment of the mission during the Japanese retreat and fire at the player with their tail gunners.

Dive bomber also appears on the deck of the Toshikaze in the mission "Supercarrier Sabotage" were Phillip Bromley and griffin need to use it to escape, Bromley flys the plane and the player has to use the tailgun to defend the plane from enemy fighters. 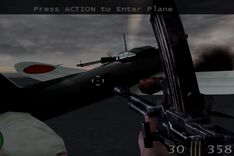 Dive bomber on the toshikaze. 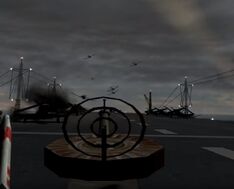 when Bobby McAfee is touring Thomas Conlin around pearl harbor some vals fly over the heads of the sailors and start bombing the Harbor causing mass destruction, Thomas jumps into a PT boat and start shooting at the planes .

Aboard the U.S.S W Virginia the sailors on the ship use the deck guns to defend the Nevada from some dive bombers after the Nevada escapes the bomber switch their gaze to the W Virginia herself but are also destroyed.

Some Vals appear during the attack on Henderson Airfield bombing the hangars housing fighters and dive bombers they must be destroyed before they destroy all the hangars or the mission will fail.

Val after completing a Dive.

A closeup of a Val Note: the missing landing gear.