Several soldiers from the 101st Airborne Division were scattered in the French hedgerows near Carentan. Two officers from the 2nd Ranger Battalion, Lieutenant Mike Powell and Captain Ramsey, were sent to find these men, while at the same time destroying Flak guns and Nebelwerfers in the area.

The 101st Airborne Division was stranded in the French city of St. Mathieu while trying to fend off an ambush set up by the German forces. The division was aided in their survival by Office of Strategic Services Lieutenant James Patterson.

In Medal of Honor: European Assault, the 101st Airborne fought in Rocherath along with Office of Strategic Services Lieutenant William Holt. Following the German offensive in the Belgian Ardennes, the division is deployed in Bastogne. Surrounded, the division will support the seat of better or worse in the most terrible conditions until the breakthrough of the 3rd Armored Division under the command of General Patton. In Ardennes forest fought with the 28th Infantry Division's soldiers for destruction of Van Schrader's bunker.

The 101st Airborne in Rocherath.

The 101st Airborne returns in Medal of Honor: Heroes. In the Belgium campaign they assist Lieutenant William Holt on his missions. There are two versions avaliable in multiplayer. The "Paratrooper" which got green snow covered uniform and the "Airborne" which got tan snow covered uniform with snow camo helmet. In both models the Screaming Eagle patch can be seen on the left arm. 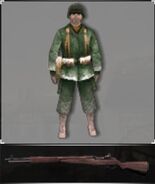 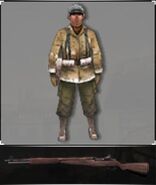 82nd Airborne paratrooper Cpl. Boyd Travers had brothers from the 101st Airborne who was captured by the Germans in Bastogne only to be rescued.

In the multiplayer level: Kunar Base the insignia of the 101st Airborne Division can be spotted on one of the plywood.